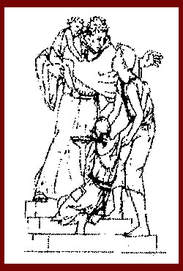 Our church is named in honor of St. Thomas of Villanova, a sixteenth century Spanish Augustinian. Thomas was born at Fuenliana in the diocese of Toledo, Spain, in 1488 and was brought up in Villaneuva de los Infantes, a nearby town; hence his name, Thomas of Villanova. He went to the local school at Villanova, and then proceeded to a brilliant career as a university lecturer at the universities of Alcala and Salamanca. But academic success alone did not seem to provide him with a completely satisfying goal in life.

Thomas joined the Augustinian order in November 1516. In 1518, he was ordained a priest, and was immediately employed in preaching and administering the Sacrament of Reconciliation. He taught, with great acclaim, a course of theology at the Augustinian school at Salamanca. Although leading a busy life, Thomas kept up his daily life of prayer as an Augustinian religious.

In the year 1544, King Charles V of Spain appointed Thomas as Archbishop of Valencia. He was fifty-six and keen to begin the task allotted him. He set out for Valencia, 530 kilometers away, on foot after his Episcopal ordination.

Thomas succeeded in the spiritual renewal of his diocese, and gained the title "Father of the Poor". He gave two-thirds of the income of his diocese to care for the poor in various ways. Each day up to 500 people came to his door to be fed and to receive money.

During his eleventh year at Valencia, Thomas contracted a serious illness which resulted in his death. In keeping his request, he was buried in the Augustinian religious habit. some time later his remains were removed to the Cathedral of Valencia where they are venerated still. In 1658 Pope Alexander VII declared him a saint.

Thomas of Villanova, "Father of the Poor" is remembered to this day because of his generous and dedicated way of life. He saw what Christ wanted of him, and accepted God's grace in order to fulfill it.

The Augustinian Order has adopted St. Thomas as the Patron of Students. Thus a number of Augustinian educational institutions are named after Thomas. The most notable of these institutions is Villanova University, Pa. U.S.A.